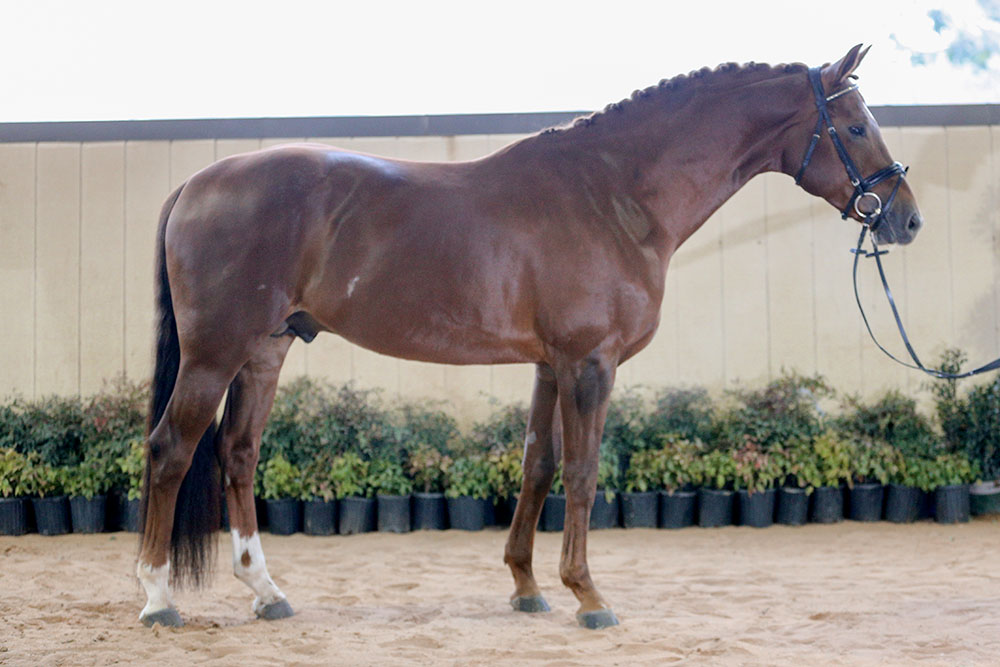 NEW Hanoverian approved Stallion in Canada! Gallant Reflection(Galant Du Serein/Rohdiamant/Warkant) was RESERVE CHAMPION of his 70-DAY Stallion Testing with an overall score of 127points(127.64 Total/128.62 Dressage/120.27 Jumping). He finished 2nd in dressage & 4th in jumping – A truly versatile stallion with such exciting bloodlines to offer breeders.

In 2015 with Olympic medalist-Lisa Wilcox, Gallant Reflection was the USEF Six-Year Old NATIONAL CHAMPION, scoring 8.8 for his outstanding trot. As a seven-year old he placed in the Top 6 at the USEF Developing Prix St. Georges National Championships & finished in the Top 20 for USDF Horse of the Year standings for both Prix St. Georges & Intermediate I. In 2016, he finished 1st in Developing PSG in Palm Beach & 5th at the USEF Developing Horse National Championships. In 2018, Gallant Reflection debuted at Intermediate II & Developing Grand Prix with scores in the 70s, he ranked in the Top 10 for the USDF Horse of the Year standings for Intermediate II. Gallant Reflection’s sire, Galant du Serein – the charismatic Selle Francais stallion who descended from exceptional French breeding. He competed at the top of International dressage sport including the Olympics, World Equestrian Games & FEI World Cup Finals. Galant du Serein’s grandsire, Double Espoir – was named French Sire of the Year on multiple occasions. He sired many licensed offspring including Apache d’Adriers and the popular Flipper d’Elle, a frequent member of French National showjumping teams. Double Espoir is widely known as a “sire of sires” & producer of Olympic medalists, Nations Cup, CDI and CSI winners. Gallant Reflection’s dam is by Rohdiamant – whose bloodlines include Rubenstein & Inschallah recognized for generations as proven producers of TOP athletes, auction sellers & international dressage horses. Gallant Reflection adds elegance, a beautiful expression, & good elasticity combined with his excellent character. In 2021, Gallant Reflection sired a Champion Yearling filly Gaia Nocturne, Champion Yearling colt Gent Lee & two-year old stallion, George Lloyd HU Won his Futurity at his AHS/ARS Inspection. With the combination of Rohdiamant on his dam’s side and the athletic and talented Galant du Serein as his sire, Gallant Reflection HU compliments a wide variety of mares.