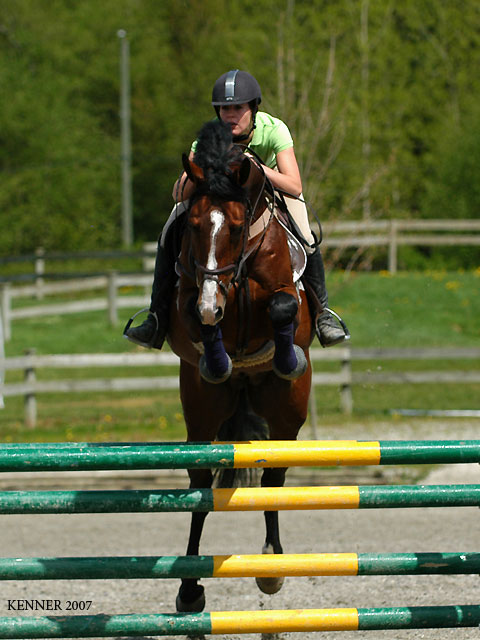 *** Kenner is Nominated to the 2021 Stallion Service Auction only; he is not activated for 2021, however, his foals of 2022 are eligible for registration on payment of a Breeding Certificate fee. Kenner is available by proven Frozen Semen only, the property of Mirrabook Farms.***

Like his sire Kingston, Kenner shows talent for both dressage & jumping with strong willingness to work; excellent character, and a beautiful easy going temperament. He is a very powerful mover with a huge gallop.

Champion of his licensing, he was scored a ‘9’ on his jumping where he showed a ‘scopey, nice bascule and powerful, good technique behind’; he further impressed at his Performance Test giving both judges & riders a good feeling in scope & style of jump. With his good conformation he was also scored an ‘8’ on correctness of gaits.

Kenner demonstrates under saddle the easy going nature of his sire, with a great willingness to work. At his Performance Test in 2005 he was described by the judges as ‘being a good natured stallion, versatile, and predominantly a stallion in jumping’.

Test Riders described him as ‘tried really hard; good rhythm in canter; good feeling of scope and style; great expression; moved well off leg’. Erynn Ballard immediately identified the influence of ‘Lucky Boy’ in both his appearance and ride! While as owners we wished he had more time under saddle prior to the test, we were thrilled that all test riders enjoyed riding him and he worked willingly for all of them.

Kenner is sold and is available by frozen semen only. He initially trained with Thunderbird Training Center in Langley and is now, at the grand age of 21, still competing in the Jumper ring with an Amateur.