After stepping out to 5th place in his first future Prix at WEC a few weeks ago, WH Luciano continued to develop and impress this past weekend in his first time under the lights to take 7th out of 68 entries.
We are very excited about this talented stallion’s future and the promising future of his offspring who have had consistent top placings in the 5 year old classes over the past month. Here is his first round from the past weekend.

Welcome to the Alberta Chapter.  We have an active membership of enthusiastic breeders and owners. If you are looking for a new Warmblood horse or an opportunity to join in our breed activities, we are ready to help. For more information about our programs and events contact us at ab_chapter@canadianwarmbloods.com,  for information about our foal futurity and mare inspections contact ab_inspections@canadianwarmbloods.com.

Alberta is the westernmost province of the prairie heartland, bordered by the Rocky Mountains to the west. It’s also the largest horse producer regardless of breed, but in the case of Warmbloods, around 40% of annual registrations originate with Alberta breeders. Known as ‘cowboy country’, the region boasts the ‘greatest show on earth’ – the Calgary Stampede. However, even more famous in the world of equestrian sport is Spruce Meadows, whose Masters’ tournament is a horse sport mecca that draws the world’s top showjumpers, providing a template for local breeders and a familiarity with bloodlines to produce the highest quality sport horses. 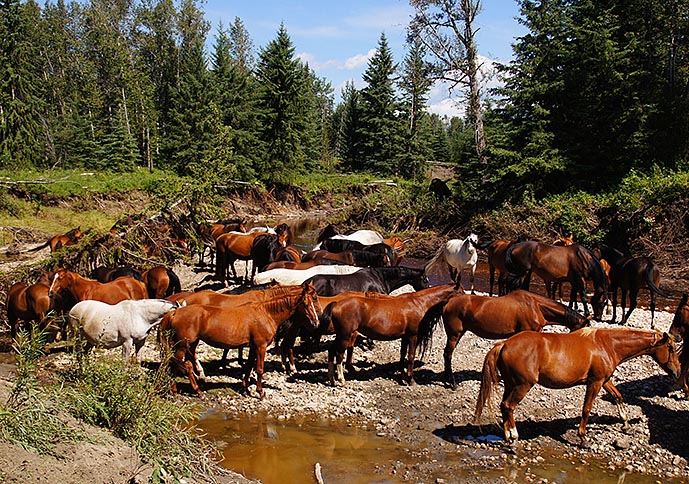 The pleasure of napping in the sun

Some of the very first Warmblood stallions imported into Canada in the late1960s found their way to Alberta. The first wave to arrive was predominantly Hanoverian. Stallions such as Abrupt (Abglanz x Adlerfarn) imported by Joe Selinger in 1967, laid the foundation for what was to follow. A steady stream of quality stallions representative of many of the top bloodlines in Europe ensured that Warmblood breeding in Alberta was on a firm footing, and with the advent of frozen semen that practice has continued.
Alberta breeders have been early adopters of advances in breeding technology and that has allowed them to remain competitive. They have also been innovative: the CWHBA Fall Classic Breeders Sale is the longest running Warmblood sale in North America. Warmblood horses are becoming so ubiquitous that they now dominate horse shows at all levels.

In spite of the harsh winters, Alberta, in many ways provides an ideal environment to produce healthy, sound horses. The drier climate means that horses can stay out year-round even in the coldest winters, which is the case for most breeders. This means strong bones developed through steady exercise. Feeding forage for six or seven months a year is a challenge, but the quality is good, predominately timothy, brome, and alfalfa. During pasture season the grass is abundant; fescue in the center and north of the province and wheat grass and rye grass in the dry south as well as native grasses. 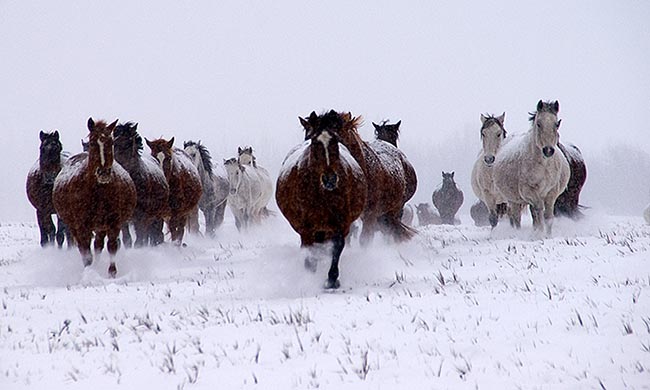 Mares in the snow

Alberta has always had several large-scale breeders with 10 or more mares, but the backbone of the industry is the small breeder with two or three mares. The worldwide trend toward frozen semen is well established and the development of stallion stations is also taking hold in the province, with a few stud farms offering more than one stallion. Several owners are very active in competition with their stallions, thus demonstrating the high quality of genetics available locally. The pedigrees of Alberta stallions reads like the who’s who of Warmblood breeding with sons of Calido, Hickstead, Numero Uno, I’m Special de Muze and Quidam’s Rubin to name just a few. Although jumping lines do predominate, top dressage sire lines are also available containing the bloodlines of Rock Forever, Florestan, Lauries Crusader xx and Donnerhall.

If Alberta is a good place to breed Warmbloods, it is probably an even better place to buy them, since production outstrips demand from the relatively low population. Alberta-bred horses can be found throughout North America and have even been exported to Europe. Alberta constitutes the core of Warmblood breeding in Canada, but it is not the sum.