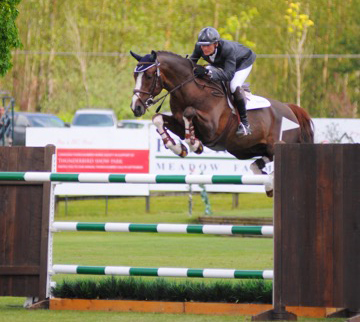 Vaust S, a competition proven Grand Prix stallion to 1.60m, is ready for breeding season 2021. His offspring are already competing and winning in Holland.

He produced several small foal crops before he left in 2009 Europe, 8 foals in total all of whom jump. Dilithyia a grey mare by Vaust is now on the big tour FEI 4**** winning Grand Prix and producing many double clears for Van Liere Stables.
(News Flash, she just placed in the ribbons in the FEI 5* in Dubai.)
Creme de La Creme, a gelding has competed well twice at Hickstead in the U.K. and won the Longines watch in competition in Hong Kong.
They all show strong jumper talents and take you to the fences with the same carefulness and scope.

Vaust S will continue the “tradition of influence” in show jumping left by his legendary bloodlines including:
– Furioso II, grandsire, was approved for the Oldenburg studbook in 1967 and later was approved for Hanover, Rhineland, Hessen and Westfalia. For over 10 years, Furioso II was ranked in the top three sires of leading money winners in Germany and had winners in all disciplines, particularly influential in dressage.
– Ramiro Z an international performer himself under Fritz Ligges, influenced nearly all European Performance Studbooks. His sire, Ramzes stood at the Holstein Verband to refine the heavy warmblood horses of the area and was an immediate success as a sire producing
international jumpers and dressage horses.
– Nimmerdor the KWPN stallion of the 20th Century, also produced champions in both advanced dressage and international jumping, siring many exceptional broodmares and daughters.
Nimmerdor successfully competed in many World Cups and International Competitions.

Vaust S reminds you of his grandsire Furioso II in both looks and deportment. The striking difference is that Vaust has 4 even white stockings that hit the middle joint on each leg. He is striking and it seems to pass on to many of the offspring. The white stockings and white on the face as well as the athletic talent, so you can breed for both performance and looks.