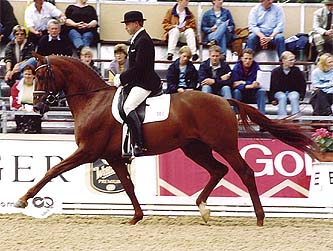 Wild Dance was the Champion of his Stallion Performance Test in Germany with a dressage index of 147.57. He also received a 9 for jumping. Wild Dance’s sire, Wolkenstein II, was also Champion of his performance test and known as one of Weltmeyer’s best producing sons with 46 licensed sons of his own.

Wild Dance’s dam, States Premium mare Milva, by Matcho x, has Gotthard and Abhang III on her maternal side. This nick created many upper-level dressage competitors, top producing mares, licensed stallions, and has proven to be exceptional. Wild Dance qualified for the Bundeschampionate and placed fourth in the finals. He is an accomplished international competitor, winner of six Grand Prix and many placings in Europe.

In 2005, he was Reserve Champion at the Neurenberger Burg Pokal Finals with Hubertus Schmidt. They showed in this prestigious German show circuit with the highest qualifying scores of any competitor that year, routinely scoring over 75%. Wolkenstein II produces great rideability, gaits, conformation and type as witnessed by his high breed values in those areas. Wild Dance passes on type, quality gaits, exceptional temperament and willingness to work which result in typey high performance offspring. In 2011, Wild Dance had less than 50 offspring because of his owner’s focus on performance.

Yet, with only 24 offspring in competition, 10 had successes and four are placing at the Grand Prix Level. At only seven years old, Will Be already placed at Grand Prix, and by 2011 had 43 placings and nine victories. Seven mares sired by Wild Dance became States Premium mares in Germany. In 2007, he produced Windsor VT, the highest scoring Premium colt on the entire Oldenburg N.A. tour, and Reserve Champion at Devon. Deyonce (Wild Dance/Contucci) became one of only three Swedish Diploma mares in the U.S. and Wild Gambol HU became an EMC and won the 5-year-old future dressage horse class at Devon in 2012.
50% off our posted breeding fees on breedings to any mares sired by the Rainbow Equus Meadows stallions Baron Van Gogh aka Van Gogh B, Corcovado, Escudo II, Fuerst Gotthard, Grandom, Kalypso, Landfriese II, Landk’nig, Pablito, Pablo, Rubignon and Wild Dance.